Today we often think of Santa Claus as living in the North Pole (when he’s not busy flying around the world on his reindeer-drawn sleigh delivering gifts to children). But the birthplace of Saint Nicholas was actually in Patara, Asia Minor (what is now Turkey) and he lived much of his life in Myra at modern-day Demre. So how did this 4th-century Christian saint and Greek bishop become the bearded, red-suited Santa Claus we know today?

Nicholas was born into a wealthy Greek Christian family in Greek Anatolia in the Mediterranean port of Patara. He was devoted to religion from an early age, observing the canonical fasts of Wednesdays and Fridays. After his parents died in an epidemic, Nicholas went to live with his uncle who was the bishop of Patara and who later ordained him as a priest.

Nicholas is believed to have made a pilgrimage to Egypt and the Holy Land sites of Golgotha and the Holy Sepulchre between 312 and 315 AD, living in a mountain cave with Anatolian monks overlooking Bethlehem. The Saint Nicholas Greek Orthodox Church is today located on the site of the cave in Beit Jala where he resided and a text written by Nicholas is kept by the Greek Orthodox Patriarch of Jerusalem.

After his years in the Holy Land, Nicholas then returned to Asia Minor and was consecrated as the bishop of Myra. His church still stands today and has become an important pilgrimage site for Christians from across the globe, with beautiful interior frescoes. A bronze statue of the saint was created by Russian sculptor Gregory Pototsky and positioned prominently outside the church.

Saint Nicholas was renowned for his secret gift-giving, which has given rise to the figure known as Santa Claus. Not only Orthodox Christians but also Anglicans, Lutherans and Catholics revere him and he has become the patron saint of sailors, merchants, children and repentant thieves in many European countries.

In addition to being the hometown of Saint Nicholas, ancient Myra is renowned for having the largest amphitheatre in Lycia and an outstanding collection of rock-cut tombs that have been carved into the cliffs. The ruins of Myra lie just to the north of Demre, which is a popular stop on Gulet cruise cabin charters along the Mediterranean Coast of Turkey. 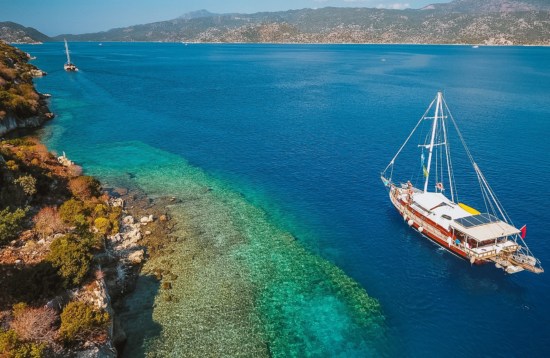 "A2B Yachting" offers an unforgettable blue cruise from Kas to Kekova, sailing back to Kas at the end. Explore this beautiful stretch of the Turkish Riviera and the mysterious Lycian Coast on a Turkish Gulet. Enjoy unique experiences on a…